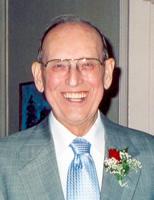 Kenneth E. Fugate Kenneth E. Fugate finished his earthly race and joined the saints on June 2, 2007 with his family by his side. He was born in Cashiers, North Carolina on April 26, 1929, son of Benjamin and Opal (Carner) Fugate. He was a graduate of Millcreek High School and attended Erie Business Center. He enlisted in the Navy during the Korean Conflict and served as an electrician on a minesweeper in the Pacific. He married Donna Bowser on June 18, 1955 and was overjoyed that they were able to celebrate their 50th Anniversary with their family and friends. He and Donna were blessed with three sons and he was always devoted to his family as it grew through the years. Ken worked for Inland Container for 27 years and retired as office manager in 1982. He also had a tax preparation business for many years. He was an elder at the Westminster Presbyterian Church and was a founding member of the Church of the Cross (Presbyterian). He served as the building fund treasurer and the financial treasurer for both churches for many years. He was involved in MYAA sports, was an organizer for many years for the Millcreek High School Class of 1947 reunions and gatherings, and was active in the Inland Container Retirees Group. He was an avid reader and golfer. He was a life long learner who always enjoyed the challenges of learning new things and expanding his horizons. He is survived by his wife, Donna (Millcreek) and his sons, Douglas and his wife, Kate (Millcreek), Mark and his wife, Wendy (Fairview), and David and his wife, Amy (Millcreek). He is also survived by seven grandchildren: Andrew Fugate and his fianc&eacute;e, Fay, Robbie Fugate, Timmy Fugate, Jimmy Fugate, Shannon Fugate, Katherine Fugate, and Benjamin Fugate. One great grandchild, Minah Fugate, also survives him. He is survived by his brother, Dwain Fugate (Millcreek) and his sisters, Berniece Clapper of McKean, Barbara Anderson and her husband, Merle of Sheffield, Pa, and Beverly McKinley and her husband, George of Fairview. Friends are invited to attend a time of visitation at the Dusckas-Martin Funeral Home, Inc., 4216 Sterrettania Rd. on Tuesday, June 5, 2007 from 2 to 4 and 7 to 9 p.m. A service of witness to the resurrection will be held at the Perkins Presbyterian Church, 5440 Washington Ave., on Wednesday, June 6, 2007 at 11a.m. Interment will follow at Laurel Hill Cemetery. Memorials can be made to the Perkins Presbyterian Church, 5440 Washington Ave, Erie, PA 16509 or to the Church of the Cross, 5901 Millfair Rd., Fairview, PA 16415.