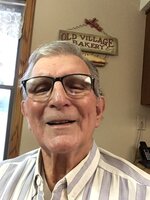 Joseph Andrew Belan, Jr. A New Chapter... Joseph Andrew Belan, Jr., age 81, of Millcreek Township, died Sunday, June 12, 2022, following a full life as an Author, Teacher, Coach, Scholar, Leader, and Loved Father. Joseph was born in McKees Rocks, PA on October 28, 1940, the son of the late Joseph Andrew, Sr. and Mary Belan. Joe attended McKees Rocks High School where his athletic abilities landed him a basketball scholarship to William and Carey in Mississippi. After receiving his Bachelor’s Degree in Science, Joseph followed his dream as a coach; which led him to his teaching career that spanned over three decades at many different schools within the Norwin School District. He finally retired to Erie to enjoy his retirement with his late wife Sharon Belan. In Erie, Joseph was able to enjoy golfing, reading, cooking, writing, working with Erie's development through The Knights of Columbus, and the Y-men group. But spending time with his love Sharon was his most treasured pastime. After Sharon's passing, Joseph wanted to re-live his love for his late wife by writing a story of their journey and struggles the two shared during Sharon's battle with cancer. In 2013, Joseph finished UR Here Always, a love story chronicling their time together. He is survived by his three daughters, Hallie Estepp (Vaughn), Barbara Stevens, Heather Pisciotti, and son Jason Belan (Jennifer). His step sons, Steven Skelly and Dr. Michael Skelly (Sarah), 14 grandchildren and 9 great-grandchildren. He was preceded in death by his parents Joseph and Mary Belan, his sister Marion Dominic, and his daughter Kimberlee Belan. Friends may call TODAY, Sunday June 19, 2022 from 3:00 pm until 7:00 pm at the Dusckas-Martin Funeral Home and Crematory, Inc., 4216 Sterrettania Rd. and are invited to the Funeral Mass on Monday, June 20, 2022 at 10:00 am at St. George R.C. Church, 5145 Peach Street, Erie, PA 16509. Interment Laurel Hill Cemetery.