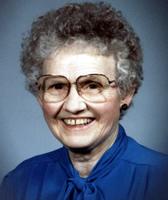 Della Louise McMichael Della Louise McMichael was born the 3rd daughter of Alice Barlett Henry and Wm. Edward Henry in Scotch Hill, PA on August 20, 1909. She was preceded in death by her husband, Donald W. McMichael, whom she was married to for 74 years, three sisters: Mary Jane Torrance, Carrie Bemis, Irene Bish, and one brother, Arthur Barlett. She is survived by her daughters: Janet Warner and husband, Eugene, of Ridgecrest, CA, Sally Horner and husband, John, of Raleigh, NC, and one son, Kenneth McMichael and wife, Jacqueline, of Erie. She has eight grandchildren: Connie Montemayor (Ridgecrest, CA), Donald Warner (Lacy, WA), Sally Evans (Great Falls, MT), Tim Osiecki (Raleigh, NC), Scott Osiecki (Skaneateles, NY), Kym Arnell (Carmel, IN), Kristi Vasofsky (Potomac Falls, VA), and Keri Saporito (Oak Hill, VA), and 19 great-grandchildren. She graduated salutatorian at East High School at the age of 16, having taken her junior and senior years together. She then graduated from Iowa National College, part of Garrett Theological Seminary. She was a Methodist Deaconess and worked in both the Cleveland and Chicago slum districts. She married in 1931. Through the years she was a leader in all areas of the United Methodist Church and served as District United Women's President. She was responsible for starting what was the South East Erie Mission, now known as the Rainbow Connection. A very creative person, she loved to read, write poetry, loved her garden, and needlework. At age 80 she wrote her autobiography. She was a long time member of the Tenth St. UMC and until her death, a member of Trinity UMC. She was a remarkable lady, who taught us all how to live and how to die. Burial will be private under the direction of the Dusckas-Martin Funeral Home and Crematory, Inc., 4216 Sterrettania Rd. Memorial contributions may be made to the Trinity UM Church, 3952 Pine Ave., Erie, PA 16504 or to the Erie City Mission, 1023 French St., Erie, PA 16501. Enhance your memorial with a slideshow and video