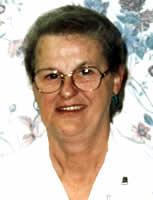 Margaret J. Jackson Decker Margaret &quot;Peggy&quot; J. Jackson Decker, age 68, died Sunday, March 30, 2008 at her Erie residence. She was born in Erie on July 4, 1939, the daughter of the late, Robert and Doris Innes Jackson. She was employed at the Sarah A. Reed Retirement Center for 17 years until her retirement. She was a member of the Red Hat Society and enjoyed bowling, and spending time with her grandkids. She was preceded in death by her husband, Nevin Irwin; one sister, Marion Jackson; two brothers, Harold Jackson and Robert Fuller; and one nephew, Joseph Jackson. She is survived by one brother, Lee Jackson, of Alabama; two daughters, Marion L. Irwin, of Erie, and Mary Hammer and her husband, Scott, of Seattle, WA; one son, Nevin Irwin, and his wife, Kim, of Girard; five grandchildren, several step-grandchildren, and several nieces and nephews. Friends may call at the Dusckas-Martin Funeral Home and Crematory, Inc., 4216 Sterrettania Road, Erie, PA, on Wednesday from 7 to 9 p.m. and Thursday from 2 to 5 and 7 to 9 p.m. and are invited there on Friday at 11:00 a.m. for the funeral service. Interment Laurel Hill Cemetery. Memorial contributions may be made to VNA Hospice of Erie County, 1305 Peach Street, Erie, PA 16501 or to Rolling Thunder, Inc., 4424 Amherst Road, Erie, PA 16506.
To plant a beautiful memorial tree in memory of Margaret Decker, please visit our Tree Store

A Memorial Tree was planted for Margaret
We are deeply sorry for your loss ~ the staff at Dusckas - Martin Funeral Home
Join in honoring their life - plant a memorial tree
Services for Margaret Decker
There are no events scheduled. You can still show your support by planting a tree in memory of Margaret Decker.
Plant a tree in memory of Margaret
Print
Share A Memory
Plant a Tree