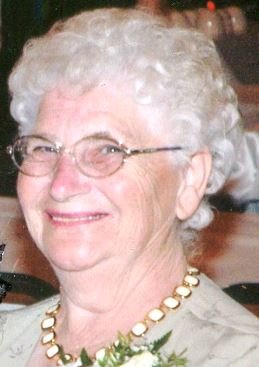 June M. Seroka age 88 of Lake City, passed away at her daughter Karen’s home on Sunday June 9, 2019, following an extended illness.  She was born in Lewisville, PA on October 18, 1930 a daughter of the late Earl S. and Kathryn (Lindberg) Jackson.  She had resided in Erie most of her life.

She was a 1948 graduate of Fairview High School.  She was employed as a cashier at Giant Eagle.  June was a longtime member of St. Matthew’s Lutheran Church and was also a member of the Cascade Club Auxiliary and a former member of the Eagle’s Club Auxiliary.  She enjoyed bowling, gardening and spending time outdoors.

In addition to her parents she was preceded in death by her husband, Howard C. Seroka in 2001; two brothers, George E. Jackson and Earl S. Jackson Jr. and two sisters, Shirley Ann (David) Schaming and Ruth (Merle) Wright.

Friends may call at the Dusckas-Martin Funeral Home & Crematory Inc. 4216 Sterrettania Rd. on Wednesday from 4:00 to 7:00 PM and are invited to a funeral service there on Thursday morning at 11:00 AM.  Interment will follow in Wintergreen Gorge Cemetery.