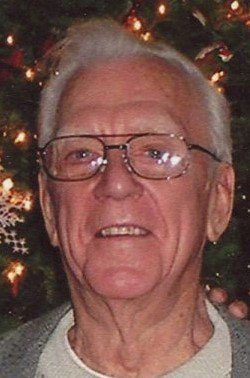 Raymond M. Dougherty, age 95, of Millcreek Twp., passed away on July 29, 2019, at Forestview Nursing Facility.  He was born in Erie on January 2, 1924, a son of the late Raymond and Rose Dougherty.  In addition to his parents he was preceded in death by his wife Elizabeth in 2000, one daughter in infancy; one grandson, David Salvatore; two brothers, John and Donald Dougherty and one sister, Colleen Griffin.

Ray proudly served his country during WW II.  He retired from the Pennsylvania Department of Transportation as a deputy Treasurer.  Ray was very active in local politics throughout his life, serving as a chairman for the Democratic party in Millcreek Twp. and was also a State Committeeman for the Democratic Party.  He enjoyed hunting, fishing, sports and was an avid Pittsburgh Steelers fan.

Ray is survived by two daughters, Janice (Ronald) Wisniewski of Millcreek Twp., and Susan (Richard) Howell of McKean; six grandchildren, Kristin, Eric, Gary, Brian, Douglas and Patrick; seven great-grandchildren, Lucas, Bristol, Madison, Liam, Connor, Nicholas and Vivienne and numerous nieces and nephews.  The family would like to thank Ray’s caregivers at Forestview Nursing Facility for all their care and support.

Friends may call at St. Jude Catholic Church, 2801 West 6th. St. (please use the parking lot on the west side of the church) on Saturday September 14, 2019 from 10:30 AM until the time of the Memorial Mass at 11:00 AM.  Inurnment will follow in Calvary Cemetery.  Arrangements are under the care of the Dusckas-Martin Funeral Home & Crematory Inc. 4216 Sterrettania Rd.

In lieu of flowers memorial contributions may be made to either, St. Jude’s Children’s Hospital, 262 Danny Thomas Place Memphis, TN 38105 or Because You Care, PO Box 54 McKean, PA 16426.