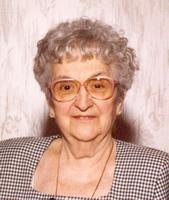 Henrietta Carmela Esper Henrietta Carmela Esper, age 91, resident of Manchester Lodge, died on Friday, April 20, 2007, at Millcreek Community Hospital. She was born on March 24, 1916, the daughter of the late Nicholas and Maria Zezza. She lived most of her life in Pittsburgh, PA until moving to Erie in 1972. She became a resident of Manchester Lodge about six years ago. She was a very devoted wife and mother all of her life. She enjoyed trips to various destinations with the traveling group she would participate with. She was preceded in death by her late husband of 41 years, Roger Edward Esper; two sisters, Angela Zezza and Amelia Curtin; two brothers, Charles and Patsy Zezza. Survivors include three children: Dr. Roger Esper and his wife, Rosanna, Dr. Robert Esper and his wife, Patricia, and Dr. Alan Esper and his wife, Deborah, all of Millcreek; one sister, Mary Dolder and one brother, Felix Zezza, both of Pittsburgh. She also had ten grandchildren. Friends may call at the Dusckas-Martin Funeral Home, Inc., 4216 Sterrettania Rd. on Monday from 2 to 4 and 7 to 9 p.m. Burial will be private and will follow a service at St. George's Syrian Orthodox Church in Pittsburgh, PA on Tuesday at 11:00 a.m. In lieu of flowers, contributions can be made to St. George's Syrian Orthodox Church, 3400 Dawson St., Pittsburgh, PA 15213.
To plant a beautiful memorial tree in memory of Henrietta Esper, please visit our Tree Store