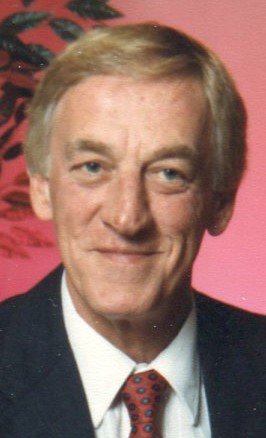 Aloysius J. Obmann, 88, of Erie, passed away on Saturday March 7, 2020 after a long battle with cancer. He was born in Erie on December 21, 1931, the son of the late Thekla and Jacob Obmann, who immigrated from Germany in the early 1900’s. He and his twin sister were the oldest of four siblings. He was a graduate of Strong Vincent High School where he ran track. He proudly served his country in the United States Navy. Al or “Obie”, as his friends liked to call him, was a long-time salesman, first owning his own business and then working for many car dealerships in the area. He was a standout bowler in many leagues, including the Polish Falcons and enjoyed golfing. He and his wife Dee enjoyed traveling and dancing together. Late night, you would catch him watching a few rounds of boxing or making picture frames at his workbench. He is survived by his wife Delores (Dee) Hartle and her daughter Sheryl Carpenter (Vicky) and daughter-in-law, Gina Carpenter of Erie, PA, who cared for him like their own father. He is further survived by his daughter, Dr. Melissa Obmann and wife Leigh Anne; grandchildren, Spencer, Jack and Grace all of Mountain Top, PA; his son, Bradley Obmann of Columbus, OH; two brothers, Richard Obmann and wife Mary Ann of St. Petersburg, FL and Vincent Obmann of Ohio and his sons from a previous marriage David, Jim and Mark Obmann of CA and NV. Dee’s other children, Mary Carpenter of FL, Daniel (Alice) Carpenter of CO, Jeffrey (Elena) Carpenter of NY and Nancy Redinger of Erie. He has a very special step-granddaughter, Danielle and step great-grandson, Roman. In addition to his parents he was preceded in death by his twin sister, Katherine Gess of Tampa, FL and Step-son, David Carpenter of Erie. He will be remembered most though for his kindness. He was always willing to help someone with a home project or some yard work. He would give you a ride if you didn’t have a car or a license to drive. He would even babysit, no questions asked and no bad reports given. He was available for brunch and came loaded with lots of “good” jokes. He was happy to sit and chat and just enjoyed having family and friends around him. He will be missed as well as his simple acts of kindness and warm heart. Friends and family may call at the Dusckas-Martin Funeral Home & Crematory Inc. 4216 Sterrettania Rd. on Tuesday, March 10, 2020 from 10:00 AM until the time of the funeral service there at 12:00 Noon. Interment will follow in Laurel Hill Cemetery. Our family would like to extend a special thank you to the doctors and staff at LECOM Senior Living Center for their compassionate care and support. We would also like to thank Dr. Zdislaw Chorzy and the staff at St. Vincent Hospital for their exceptional surgical and medical care over the years.
To plant a tree in memory of Aloysius Obmann, please visit Tribute Store
Services for Aloysius Obmann
There are no events scheduled. You can still show your support by planting a tree in memory of Aloysius Obmann.
Visit the Tribute Store
Plant a Tree
Print
Share A Memory
Plant a Tree