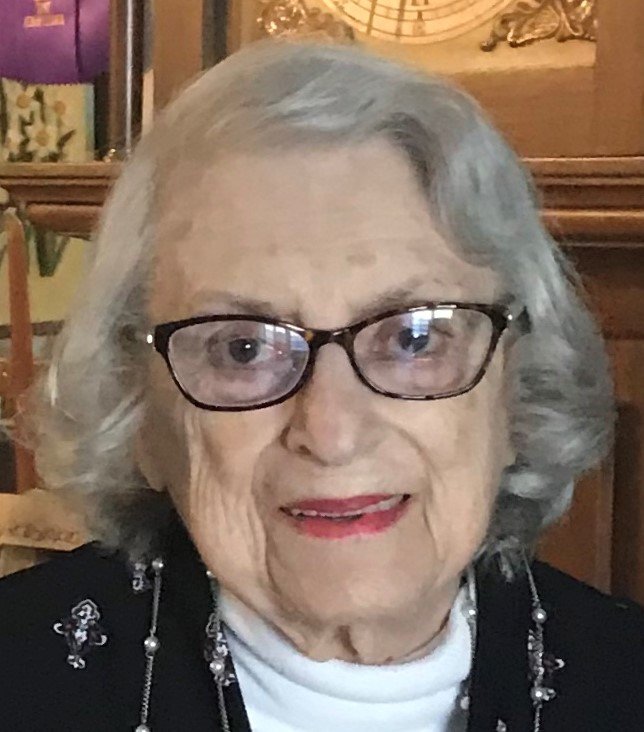 Alice C. Engel passed from this life to be with her beloved Jack, on March 19, 2020. A resident of Springhill Senior Living since 2013, she recently moved to Forestview Nursing Home. She was born in Monongahela, PA on July 30, 1931 to The Reverend Albert U. Gesler, Sr. and Nora Jane Gesler. They moved to Erie when her father took his position as pastor at St Stephen’s Lutheran Church on East 22nd Street. A graduate of Academy High School in 1949, She attended Lake Erie College, graduating in 1953 with a BS degree in Chemistry. After graduation, she was a librarian in the Erie County Library. She married the love of her life, John Engel, in September of 1954 and traveled with him to Georgia and Massachusetts after he was drafted. When he was deployed to France, she returned to Erie and worked in the research lab at American Sterilizer. With the birth of her first child, she then devoted her life to raising her children and the church. As they got older, she found her calling to education after the Erie Council of Churches asked her to teach a “Tuesday Church School” for the Barber Center at Wayne Baptist Church. After her father died in 1967, she transferred to Luther Memorial and took up the position of Director for Christian Education for several years. She then took the position at St Paul’s United Church of Christ working with Pastor Richard Kneller. She eventually found her way back to Luther Memorial, working closely with Pastor George Black. In 1974, the teachers of the Erie School District went on strike, and as a result of this, she sat down with Pastor Black and asked, “Wouldn’t it be nice if we could have a school where we could be concerned only about the education and love for our children?”. His reply……“Look into it!”. After a year of investigation, the concept of the school was presented to the congregation. Luther Memorial had the building to support this physically and the congregation supported the proposal, with the stipulation that she be the one to run the school. This led to her returning to school to get her Education Degree from Edinboro University and she led the development of the school as its founding principal. Her legacy is starting the first Lutheran parochial school in Erie, Luther Memorial Learning Center, (now Luther Memorial Academy), with a single class of Kindergarten and 1st Grade in 1976, adding a grade every year, and seeing several graduating classes up to her retirement in 1989. John always said that he had his job and they had hers as he was deeply involved in supporting her in the mission of the school. She served on the board of the Lutheran Theological Seminary in Gettysburg, PA as well as the local Lutheran Brotherhood Board. Her hobbies included sewing, playing the piano and organ. She substituted for the organists at several local churches including St. Stephen’s, Luther Memorial, Our Saviors, St. Matthew’s, Trinity-McKean, and Girard Presbyterian. She was a voracious crafter and quilter, making hats, socks and quilts for anyone who needed them. She was active in the quilting group at St. Paul’s Lutheran Church and worked with a group of women at Oak View to make knitted hats to give away to those in need. Everyone in the family had multiple handcrafted candles. She touched the hearts of thousands during her life of service. She was preceded in death by her husband John in 2016. She is survived by her brother, the Reverend Doctor Albert U Gesler, Jr., her children Lisa De Los Santos of Denton, TX, Dr. Gregory Engel (Debra) of Erie, her grandchildren Alicia Ridge (Byrron) and Ana Stone (Paul) of TX, Stephanie Pratt (Phil) Prairieville, LA, and Ben Engel of Pittsburgh, and multiple great grandchildren, nieces and nephews. With respect to the pandemic crisis and CDC guidelines, there will be no showing and the funeral will be private at Luther Memorial Church, officiated by Pastor Bill Coleman. Interment will be in the Columbarium at Luther Memorial. In lieu of flowers, the family asked that memorials be donated to the Luther Memorial Academy, 225 West 10th St. Erie, PA 16501. Arrangements are under the care of the Dusckas-Martin Funeral Home & Crematory Inc. 4216 Sterrettania Rd. Erie, PA 16506.
To plant a tree in memory of Alice Engel, please visit Tribute Store
Services for Alice Engel
There are no events scheduled. You can still show your support by planting a tree in memory of Alice Engel.
Visit the Tribute Store
Plant a Tree
Print
Share A Memory
Plant a Tree