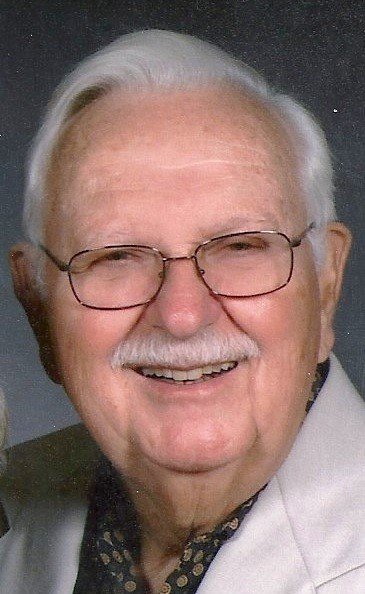 To watch live funeral feed, copy and paste into your browser. https://youtu.be/ppoYaY375lk Leonard John (Len) Schwemmer, 88, of Erie, Pennsylvania, passed away unexpectedly Sunday, August 23, 2020 at UPMC Hamot. Len was born in Detroit, Michigan on December 13, 1931, son of Leonhard and Elise Schwemmer. His family moved to Brooklyn, New York two years later. He attended high school at Newtown High School in Queens, New York and graduated in 1949. He attended Pratt Institute in Brooklyn, New York until he was called to serve in the United States Army at Ft. Lewis, Tacoma, Washington. On September 4, 1954, he married the former Pauline Nellis in the army chapel. Len earned a Bachelor’s Degree in Mechanical Engineering from Pratt Institute in 1956. He later earned a Masters in Business Administration from Gannon University. After college, Len worked for Grumman Aircraft Engineering in New York. In 1957, the Schwemmers moved to Erie where Len began his engineering career with Lord Corporation. He retired from Lord in 2004 with 37 years of service. He holds several patents for his engineering work and received many honors during his career. Len made Erie his home for over 60 years. In his retirement, he and Pauline spent winters at Six Lakes, North Fort Myers, Florida where they also were involved in the community. Len was an active member of Mount Calvary Lutheran Church in Erie and Messiah Lutheran Church, Cape Coral, Florida. He was also a member and officer of many organizations including: United Cerebral Palsy, Erie Yacht Club, PIMA, Lord Retirees and the Elks. He supported numerous charitable organizations locally and worldwide. He enjoyed boating, golfing, camping, bird watching, motor sports, wood working, gardening, computers and more. Len is survived by his children Douglas Schwemmer of Morning View, Kentucky, Paul Schwemmer of South Daytona, Florida and Lore Kimble and her husband Dr. Gregory Kimble of Hollidaysburg, Pennsylvania. Grandchildren: Megan Schwemmer Walsh, Michael Schwemmer, Lindsay Kimble Carney and Jared Kimble. He is also survived by a brother-in-law and many nieces and nephews. He is preceded in death by his beloved wife of 58 years, Pauline Schwemmer. Private services will be held on Saturday, August 29th at 11 AM. To live stream the service please go to the obituary page of www.dusckasmartinfuneralhome.com click on Len’s name, then read obituary. The service will be live by 10:45am on Saturday morning. Arrangements are under the care of the Dusckas-Martin Funeral Home & Crematory Inc. 4216 Sterrettania Rd. Erie, PA 16506. Interment will be in the Erie Cemetery. Memorial donations may be made to Mt. Calvary Lutheran Church Memorial Fund, 1603 West 32nd Street, Erie, PA 16508, Alzheimer’s Association, 1600 Peninsula Drive Suite 15, Erie, PA 16505 or Springhill Memorial Fund, 2301 Edinboro Road, Erie, PA. 16509. The family wished to extend their gratitude to Asbury Springhill where Len lived and thrived for the past seven years.
To plant a tree in memory of Leonard Schwemmer, please visit Tribute Store
Services for Leonard Schwemmer
There are no events scheduled. You can still show your support by planting a tree in memory of Leonard Schwemmer.
Visit the Tribute Store
Plant a Tree
Print
Share A Memory
Plant a Tree