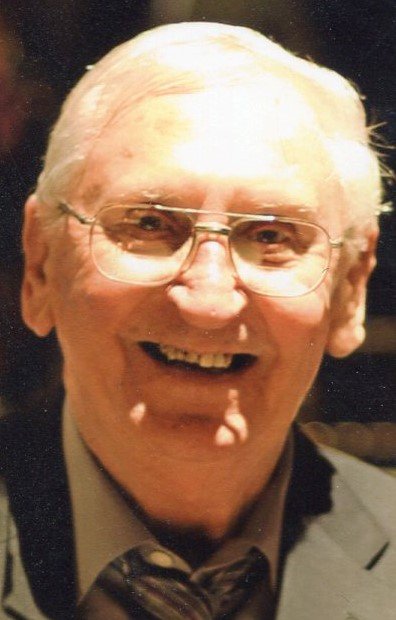 Martin Anthony Kuric Martin A. Kuric, nicknamed “Bones”, “Marty”, and “Pop Pop”, age 90, passed away after a brief illness on Sunday, August 30, 2020 in his home at Niagara Village Senior Living in Erie, PA. He was born in West Leechburg, PA on December 14, 1929, the son of the late Martin J. and Anna Louise Murchak Kuric. Marty graduated from Leechburg H.S.in 1948 and was employed at Allegheny Ludlum/ATI until his retirement in 1991 after 43 years. He was a volunteer fireman at West Leechburg Fire Department, calling BINGO in their Recreation Hall for many years. He was also a member of the Sokol Club in Leechburg. He moved to Erie to be closer to his son and his family after his beloved wife of 56 years passed away in 2012. Martin was a member of Christ the King Parish in Leechburg and became a member of St. Paul’s Lutheran Church after relocating to Erie. A kind gentleman, he often sat in “his” chair in the atrium at Niagara Village where he enjoyed watching people and chatting with the staff. He also enjoyed worshipping his Lord and Savior at St. Paul’s Lutheran Church, going out for a “good meal” at local restaurants, doing crossword puzzles, following the Pittsburgh and Erie sports teams, and mostly spending time with his family. Besides his parents, he was preceded in death by his wife Theresa A. Romeo Kuric in 2012 and one brother Frank Kuric in 2018. Martin is survived by his son Dr. Kevin M. Kuric (Beth) of Millcreek, two grandsons; Brian A. Kuric (Alyssa) of Worthington, OH and Justin D. Kuric, of Columbus, OH. He also is survived by two sisters; Josephine Donghia formerly of Vandergrift and Betty Ulizio (Mario) of West Leechburg. Arrangements are being handled by Dusckas-Martin Funeral Home and Crematory, Inc. Private entombment at the mausoleum at Greenwood Memorial Park in Lower Burrell will take place at the family’s convenience. A celebration of Marty’s life will be planned for later this year. The family would like to express their sincere thanks to all the staff at Niagara Village for the care and kindness they showed Marty for the past 8 years. Thanks also to the staff of Interim HealthCare during his final days, making him peaceful and comfortable. Condolences may be sent to Kevin Kuric, Apt 323, 2380 Village Common Dr, Erie, PA 16506. The family suggests memorial contributions be made to St. Paul’s Lutheran Church, 3108 Sterrettania Road, Erie, PA 16506 or to the West Leechburg Volunteer Fire Department, 1116 Gosser Street, West Leechburg, PA 15656.
To plant a tree in memory of Martin Kuric, please visit Tribute Store
Services for Martin Kuric
There are no events scheduled. You can still show your support by planting a tree in memory of Martin Kuric.
Visit the Tribute Store
Plant a Tree
Print
Share A Memory
Plant a Tree