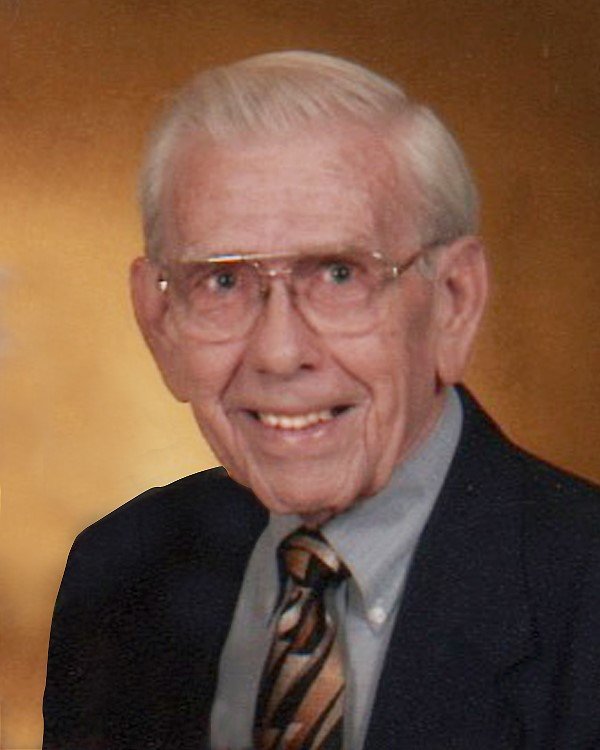 John Law, 94, of McKean, passed away peacefully at home surrounded by family on Sunday, January 17, 2021. He was born October 21, 1926, in Erie, Pa., to Kenneth E. and Mary (Thompson) Law. John graduated from Franklin High School (Franklin, Pa.) in 1944. Immediately after graduation, he enlisted in the Army Air Corps, serving until 1945 when World War II ended. Following the service, he attended Washington & Jefferson College, graduating with a degree in business. On August 31, 1949, he married his childhood friend and the love of his life, Sallie Hancox. A salesman at heart, most of John’s early career was spent with the Kellogg Company before he found his passion for real estate. After working for R.A. Orlando Real Estate for several years, he opened his own agency, which he ran for more than 25 years. Until his final days, he could remember every property and every family he helped buy or sell a home. John was a man of deep faith. For more than 65 years, he was a member of the McKean United Methodist Church, where he served on numerous committees. In addition to his work with the church, John served on the General McLane School District School Board, including a term as president. John loved woodworking, the outdoors and was an avid hunter. From an early age, he had an insatiable desire to fly. At 52, he earned his pilot’s license and a few years later built his own ultra-light airplane (much to the chagrin of his wife and daughters). Above work, hobbies and interests, John was happiest, by far, sharing life with Sallie. He especially cherished their cross-country trip, their 17 years of wintering in Florida, and the week with the entire family in Cook Forest – a tradition for more than 50 years. John was preceded in death by his parents, his sister, Laura, who died in infancy, and his beloved wife, Sallie, who died just 9 months ago. He is survived by his four daughters, Judy Lesh of McKean, Patty (David) Baney of Edinboro, Dotty (Bill) Hanna of Erie, and Amy (Kim) Costanza of Cranberry Township, Pa.; as well as 12 grandchildren and 12 great grandchildren. He is also survived by his sister, Mary Kirkwood, of Oil City, his sister-in-law Joan Barron, of Wilmington, NC, three nieces and one nephew. The family would like to thank UPMC Family Hospice – especially Laurie, Melanie and Danielle – for their compassionate care. Special thanks as well to his niece, Linda Wilbur, who offered love, wisdom and support when it was needed most. Due to the COVID-19 crisis, there will be no calling hours. A private funeral service, officiated by son-in-law Kim Costanza, will be held for immediate family. Interment will follow at Franklin Cemetery, Franklin, Pa. Arrangements are entrusted to the Dusckas-Martin Funeral Home and Crematory, Inc., 4216 Sterrettania Road. Gifts in memory of John can be made to Second Harvest Food Bank, 1507 Grimm Dr, Erie, PA 16501, or Shriner’s Hospital for Children – Erie, 1645 W 8th St, Erie, PA 16505.
To plant a tree in memory of John Law, please visit Tribute Store
Services for John Law
There are no events scheduled. You can still show your support by planting a tree in memory of John Law.
Visit the Tribute Store
Print
Share A Memory
Plant a Tree