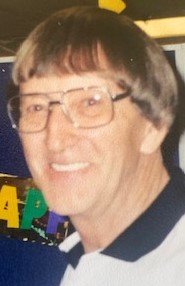 Conrad “Connie” P. Gundrum, age 81 of Millcreek Twp., passed away at his home on Saturday March 27, 2021. He was born March 2, 1940 in Erie, a son of the late Edward K. and Dorothy (Smith) Gundrum. He is survived by his high school sweetheart, Jeanette (Hurd) Gundrum and they were married for sixty years. He is also survived by one daughter, Kim (Chris) Fulton and one grandson Jonathan P. Fulton. Conrad retired from the Erie Times News after 42 years as a printer. After Retirement he volunteered his time to the local Erie chapter of Habitat for Humanity and Santa’s Helpers of Erie, building wooden toys for kids. He was a lifelong member of Perry Keystone Lodge #392 and also the Siebenbuerger Club. Conrad enjoyed travel, hunting, fishing, bowling and golf in his recreational time with family. The family would like to thank his LECOM Hospice Team, which was led by Kate for all of their care and compassion. A memorial service will be held in the future. Arrangements are under the care of the Dusckas-Martin Funeral Home & Crematory Inc. 4216 Sterrettania Rd. Erie, PA 16506. The family would like that in lieu of flowers memorial contributions be made to either, Habitat for Humanity 4922 Pittsburgh Ave. Erie, PA 16509 or Santa’s Helpers 1253 West 12th St. Erie, PA 16501.
To plant a beautiful memorial tree in memory of Conrad Gundrum, please visit our Tree Store

A Memorial Tree was planted for Conrad
We are deeply sorry for your loss ~ the staff at Dusckas - Martin Funeral Home
Join in honoring their life - plant a memorial tree
Services for Conrad Gundrum
There are no events scheduled. You can still show your support by planting a tree in memory of Conrad Gundrum.
Plant a tree in memory of Conrad
Print
Share A Memory
Plant a Tree