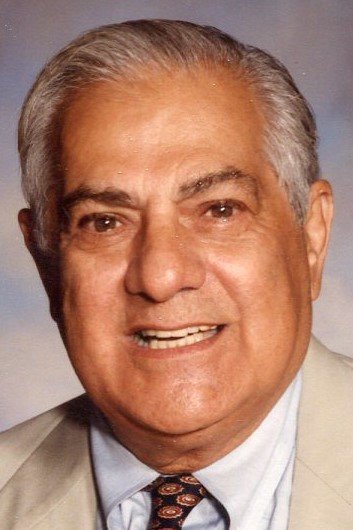 Art “Artie” Arkelian Art Arkelian of Fairview Twp., passed away peacefully in his sleep on Good Friday, April 2, 2021 in Winter Park, Florida. He was born on November 19, 1926 in Erie, Pennsylvania, a son of the late Nishan and Nora Arakelian. Art was best known to the Erie Community for his years in radio broadcasting and for organizing and running the Charity Sports Banquets. For 52 years of those banquets, he brought in an incredible list of sports legends, honored local athletes, and provided hundreds of children and adults with lasting memories and inspiration. Many local charities benefited from the proceeds of these events as well. Perhaps his greatest legacy, however, was his warmth, optimism, sense of humor, and genuine interest in and love of people. He always took the time to acknowledge and interact with those he encountered in his daily activities and inevitably brightened their lives. He was not one to ride silently in an elevator with other people, sit quietly next to a stranger on an airplane, or make a purchase without engaging in conversation with the clerk. He was a devoted husband, father, grandfather, and loyal friend to many. He enjoyed nothing more than spending time with family, playing golf with friends, reading biographies and history books, watching all sporting events, and playing gin rummy with a long-time group of friends. (Art was reputed to be one of the best gin rummy players in the city). Art was also a music aficionado and seemed to always have a song playing in his head. A graduate of Strong Vincent High School, Art attended Duquesne University and later transferred and graduated from Gannon University, and commenced his Masters at Fordham University. Throughout high school and college, he gained recognition for his talents on the football field. He was an integral part of Gannon’s best football teams and was named to the Associated Press Little All-American team twice and maintained several longstanding records. For those accomplishments, he was inducted into the Gannon University Athletic Hall of Fame as well as the Metro Erie Sports Hall of Fame. Art served his county as a Merchant Marine following the end of World War II and was drafted in the U.S. Army during the Korean War where he played on the Army Football Team. Originally intending to become a high school history teacher and football coach, he developed a love of broadcasting while at Fordham University. His career included development and ownership of radio stations in Saegertown and Corry; serving as general manager of stations in Erie, Florida, and Hilton Head; general manager of Fox 66 television in Erie, sales manager of WQLN; and most recently as a sales representative for Connoisseur Media. Throughout his broadcasting career, he was a visionary in his emphasis in making stations more local and civic minded, including broadcasting of local high school sports. For his contributions to the community, Art has been honored with numerous awards over the years including the George Mead Distinguished Service Award and the Louis J. Tullio Community Service Award. Art was a member of St. Julia’s R.C. Church, the Armenian General Benevolent Union, and a former member of the Kahkwa Club. In addition to his parents, Art was preceded in death by his brother John, his first wife Vivian (Bollinger), daughter Kimberly, and daughter Jaimie. He will be dearly missed by his beloved wife of 39 years, Linda (Cherry), three daughters: Robin Calabrese and husband Merchie of Erie, Nora Arkelian of Erie, and Adrienne Yeomans and husband Dr. Troy of Winter Park, Florida, two sons; Jon of Erie and Mark of Tampa, Florida, grandchildren: Anthony (Mara) and Lena Agnello, Sean and Kimberly Stevenson, Violet Arkelian, Isla and Kayden Yeomans; great- grandson Anthony Agnello and a great- granddaughter expected in May. His nephews: Lee, Christopher, and Matthew Cherry, Daniel Herman, and niece Kelly Herman. His brothers and sisters-in-law; Bill and Nancy Cherry and Lyla and John Herman. Friends may call at the Dusckas-Martin Funeral Home and Crematory, Inc., 4216 Sterrettania Rd. on Friday, April 23, 2021 from 3 pm to 8 pm and are invited to a Memorial Mass at St. Jude’s Catholic Church, 2801 West 6th Street, Erie, PA 16505 on Saturday, April 24, 2021 at 1:30 pm. The mass can also be accessed via live stream by going to St. Jude Apos.org website and hit the live stream link on the home page. Private interment will be at Erie Cemetery. In lieu of flowers, memorial contributions may be made to the Make A Wish Foundation, 1001 State Street, #502, Erie, PA 16501 or to the charity of one’s choice.
To plant a beautiful memorial tree in memory of Art Arkelian, please visit our Tree Store