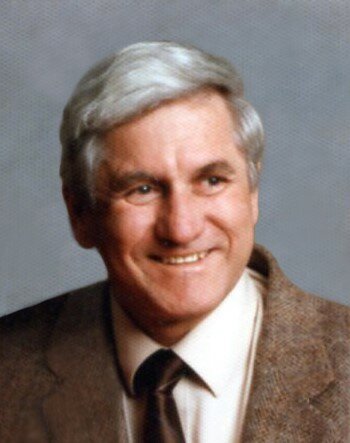 Please share a memory of Ernest to include in a keepsake book for family and friends.
View Tribute Book
Ernest Wilson Hughes April 29, 1938- August 5, 2021 Age 83, of Millcreek Twp., passed away on Thursday, August 5, 2021 due to advanced dementia. The family began noticing initial signs of dementia 16 years ago, after he experienced a stroke behind his right eye in 2005. Loving father of Alison and Christopher Hughes. Also survived by sister Annette and brothers James (Regina), Thomas (Nancy), and Joseph (Gloria). Husband of the late Janice Hughes (recently deceased), brother of the late Lester Hughes, son of the late Odias and Oleta Hughes. Ernie was born into a large, extended family in the beautiful countryside of Craven County, NC. He was the 3rd of 6 children. His father worked on the facilities maintenance plumbing crew at USMC Air Station Cherry Point, and his mother worked as a seamstress for Cohen and Goldman Co. in New Bern. Since both parents worked, Ernie and his siblings spent time every day at their Maternal grandparent’s home which was just 1.5 miles away. Nurturing, hardworking, and beloved, “Pa” Henry and Grandma Cora Weatherington were a positive and lasting influence on the children. Ernie excelled in academics, attending Bridgeton School in grades 1-8, then New Bern H.S. He also had a talent for building things in which Pa Weatherington encouraged him and mentored him. During the summers, Ernie made money doing farm work and occasional odd jobs. Of his childhood, he wrote, “we worked hard, we played hard, and we were encouraged to be creative and allowed to find our own way in life”. Upon graduating high school, Ernie was accepted at North Carolina State University, which he attended for two years (1957-59). Then unsure of what he wanted to do in life he took time off to attend a semester at the Free Will Baptist Bible College in Nashville (although later in life, he rejected the Baptist upbringing). He also worked for a year as a construction engineer and bought a new 1959 MGA sports car. Then, with renewed dedication, he returned to NC State and graduated in June, 1962 with a BS in Ceramics Engineering, as well as a full scholarship towards his Masters. Upon graduating, Ernie began work on his Master’s degree, but after one semester, he decided he wanted to get his obligation for military service behind him. On the 9th of Nov., 1962, he enlisted in the Navy and served in the Seabees (Mobil Construction Battalion Six), until it was discovered that he had a heart murmur. He was given the option of remaining in the Navy at a desk job or taking an honorable discharge. He chose the discharge and left the Navy on Dec. 7, 1964, having served for 2 years and 29 days. He then went back to college with the intention of finishing his Masters. After one semester, however, he was offered a job as a ceramics engineer at a multinational corporation (Ferro Corp.) in Cleveland, OH. Encouraged by his mother, Ernie accepted the job, dropped out of school and moved to Cleveland. As fate would have it, that same year Ernie met his future wife, Janice Allison, who was then attending Thiel College and majoring in medical technology. Upon graduating, Janice landed a job as a medical tech at Lakewood Medical and in August 1966, she and Ernie married at St. Peter’s Episcopal Church in Pittsburgh. Janice continued working at Lakewood for the next 4 years until she and Ernie had saved up enough money to start a family. In 1971, Jan being pregnant with her first child, Alison, they bought a house ai Strongsville, outside of Cleveland. Their 2nd child, Christopher was born in 1974. In 1983, Ernie was promoted to VP of FerroECA (a joint venture between Ferro Corp and Erie Ceramic Arts), which necessitated the family to Millcreek Twp. Ernie and Jan embraced their new community. Jan became a member of the Welcome Club and The American Association of University Women, and Ernie became a member of the Presque Isle Rotary. He remained an active member until 1990 when FerroECA was dissolved and he was out of a job. For the next 67 years he worked as a consultant for companies Carnet and Grace. He enjoyed the work, but it took him away from home and family for extended periods of time. He retired in 1996 at age 58. In his fr4ee time, Ernie enjoyed spending time with his family. When their children were in school, he and his wife participated in Special Olympics with their daughter, Alison, and volunteered as band parents when their son Chris, played the clarinet in the high school band. In summers the family enjoyed biking around Presque Isle and picnicking on the beach with their Labrador Retriever. In later years, they enjoyed walking the Greenway Trail, visits from their daughter Alison (who lives in a group home in Corry, POA and playing family board games. Ernie also enjoyed working on remodeling around the house, restoring his 1959 MGM (which he later sold) and pursuing his life-long love of art – a form of therapy and a past time he shared with his wife. After he retired, he and Jan took art lessons together at Asbury Barn. Of his life-long interest in art, he wrote, “My art and Jan are there as an anchor in changing times. Our son and daughter are now adults. Memories of their childhood and growing up inspired me”. Funeral arrangements were privately held by the Dusckas-Martin Funeral Home and Crematory, Inc. In lieu of flowers, please send donations to either Corry Barber Resources, 670 Sciota Rd., Corry, PA 16407 or to Lakeshore Community Services, 1350 West 26th Street, Erie, PA 16508, ATTN: Sue Bennett.
To plant a beautiful memorial tree in memory of Ernest Hughes, please visit our Tree Store

A Memorial Tree was planted for Ernest
We are deeply sorry for your loss ~ the staff at Dusckas - Martin Funeral Home
Join in honoring their life - plant a memorial tree
Services for Ernest Hughes
There are no events scheduled. You can still show your support by planting a tree in memory of Ernest Hughes.
Plant a tree in memory of Ernest
Print
Share A Memory
Plant a Tree