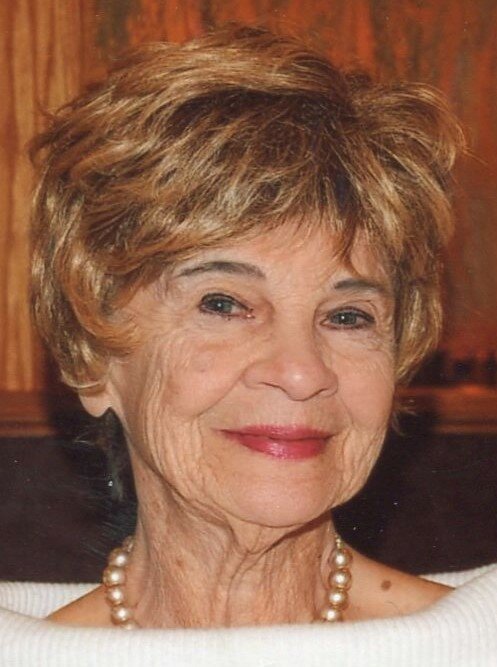 Please share a memory of Audrey to include in a keepsake book for family and friends.
View Tribute Book
Audrey Shade, 87, of Findley Lake, NY and formerly of Erie, passed away November 18th at Independence Court. She was born January 4, 1934 in Erie, a daughter to the late Milton and Lucille Doolittle. She grew up in Erie's Little Italy neighborhood and graduated from Strong Vincent High School in 1952. She won running and track metals in the Erie Times Junior Olympics and played basketball for Holy Trinity Church. After graduation she worked at Erie Technological Products (formerly know as Erie Resistor). While working there she met and married her husband of 65 years, Keith N. Shade. They married in 1954, moved to Wesleyville and had two daughters, Linda Shade Sansone and Becky Shade Majewski. After moving to Erie in 1966, they purchased many acres of property in Findley Lake, NY. While living and working in Erie, Keith and Audrey spent the next 10 years of weekends building a house in Findley Lake. They did all the work themselves. They moved to their new home in 1976. A few years later, they started building another house on the property and moved to the newer house in the mid 80's. Audrey also worked at Control Data Business Center as a Data Conversion Specialist for 20 years using early computers that generated "punch cards" for data entry conversion in the key punch card department. Her last working position was at the Smith Meter Federal Credit Union in Wesleyville. Audrey accomplished many things in her life. She was a Girl Scout Leader for two years. She started collecting antique dolls and traveled all over the US attending doll conventions. She became Vice President of the Presque Isle Doll Club and President of the Penn/NY Doll Club. She had a 1st Class Radio Operators License and her call letters were K3BLK. She took Kung Fu defense lessons. She was a volunteer and treasurer for the Findley Lake Fire Dept. Women's Auxiliary where she helped with fundraising for the Fire Dept. She volunteered at Wild Wings Unlimited and helped founder Wendy Campbell take care of sick and wounded birds. She was an Inspector for the Chautauqua County Board of Elections and worked every election for many years. She volunteered for Erie Philharmonic fundraisers. She was a historian/genealogist for the Doolittle's of America and contributed family research information that went into the 6th Volume of the Doolittle's of America book set and was President of the Doolittle Reunion for Doolittle family members of PA and NY for over 10 years. Her husband Keith was a private pilot that built and flew airplanes and gliders at Dart Airport in Mayville, NY. He even got Audrey to take flying lessons in a Cessna 170. She and Keith enjoyed winter skiing at Peek N Peak every Friday night for many winters. They also enjoyed riding their Honda motorcycles through the Chautauqua County countryside during the summer. Keith and Audrey had a catamaran sailboat that Keith built and they sailed on Lake Erie and then bought a sailboat that was anchored in the Westfield, NY Harbor. Keith and Audrey went to Mystic Harbor, CT and boarded the Schooner Sylvian W. Beal for a windjammer cruise of the Mystic Harbor waters and Connecticut River with 5 other passengers and 5 crew members. Audrey loved to dance to music of the 50's, 60's and 70's and especially to Polish Polkas at weddings. At home she played the music of Barbra Streisand and Dionne Warwick. She said her favorite childhood memory was of going to her Grandpa and Grandma Doolittle's farm house in Sherman, NY every Sunday. She was always busy and "on the go". She enjoyed traveling and going places with family and friends. Audrey and Keith lived for 43 years in the scenic area of Findley Lake sharing their home with many pets over the years including cats, dogs and even a horse. Audrey especially loved spending time with her grandchildren and great-grandchildren celebrating their birthdays, holidays and summer picnics. She never missed going to her Wednesday "Coffee Clatch" of getting together with friends in downtown Findley Lake and going visiting and shopping with long time special friend Bonita Caulcrick. In addition to her parents, Audrey was preceded in death by her husband Keith, an infant son at birth, 3 brothers-in-law Jerome Lorei, Samuel Hamilton, Gordon Smith and special friend from high school Theresa DiNicola. She is survived by two daughters, Linda Shade Sansone (James) and Becky Shade Majewski (David), four sisters June Lorei Smith, Nancy Hamilton, Janet Pol Jackson (Robert), Karen Graves(Lon) and brother Milton Doolittle (Karen), four grandchildren, Erika Majewski Fischer (Andrew), David Majewski (Nicole), Victoria Majewski Hawthorne (Christopher), Nicolas Sansone, seven great grandchildren Brooke, Angela, Andrew and Annabelle Fischer, Nicholas and Alexander Majewski, Calvin Hawthorne, Godchild Bryan Pol and many nieces and nephews. Audrey's husband Keith who passed away two years ago, donated his body to science at the University of Buffalo. His ashes have been returned to the family and will be in an urn next to Audrey at Dusckas-Martin. In lieu of flowers, donations in their honor are greatly appreciated and can be made to the Findley Lake Volunteer Fire Dept. 10372 Main Street, Findley Lake, NY 14736, any animal shelter, Alzheimer's Foundation of America, UPMC Family Hospice or a charity of ones choice. Visitation will be at Dusckas-Martin Funeral Home, 4216 Sterrettania Road, Erie, Monday, November 29th from 4-7 and all are invited to a prayer service held for Keith and Audrey the next day Tuesday at 11:00 am. Interment will be private for them in Mitchell Cemetery, Cambridge Springs.
To send flowers to the family or plant a tree in memory of Audrey Shade, please visit Tribute Store
Print
Monday
29
November