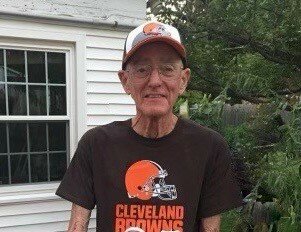 Please share a memory of Charles to include in a keepsake book for family and friends.
View Tribute Book
Charles E. “Chuck” Sawdy, 88, of Millcreek Township, PA, died Saturday, January 8, 2022, after an extended illness. Born on August 3, 1933, in Albion, Pennsylvania to Merle and Delna Sawdy, Charles graduated with top honors from Albion High School, worked at Astatic in Conneaut and Union Carbide in Ashtabula, Ohio until his retirement. Charles loved his children and their families and took great pride in his legacy that spans five generations. He enjoyed the outdoors and nature, especially his annual fishing trips to Canada with his good friend John Hayes. Chuck was adept at identifying nearly all varieties of trees and rocks, often collecting and gifting some of his prized finds to family members or keeping them to landscape his home. Being self-educated, he could also identify all species of birds, surprising even the most experienced avian enthusiasts. He liked watching sports and was an avid Cleveland Browns fan. Chuck also loved to talk politics over coffee and was a member of the Moose Club in Conneaut, Ohio. Chuck was preceded in death by Lila (Brewer) and Sherry (Specht), sisters Marjorie Lawrence and Joann Strausser. He is survived by his brothers William and Larry, his six children, Sandra Bowersox, Renae (Douglas) Hagmann, Cheryl Sawdy, Jennifer (Travis) McNay, Julie (Steve) Bidwell, and Jeffrey Specht. In addition to his children, Charles is survived by thirteen grandchildren, several great grandchildren and great, great grandchildren. Charles will be interred at St. Joseph Cemetery in Conneaut, Ohio. No funeral or memorial service is immediately planned. The family will notify loved ones in the future when a service is scheduled. Arrangements are under the care of the Dusckas-Martin Funeral Home & Crematory Inc. 4216 Sterrettania Rd. Erie, PA 16506
To plant a beautiful memorial tree in memory of Charles Sawdy, please visit our Tree Store

A Memorial Tree was planted for Charles
We are deeply sorry for your loss ~ the staff at Dusckas - Martin Funeral Home
Join in honoring their life - plant a memorial tree
Services for Charles Sawdy
There are no events scheduled. You can still show your support by planting a tree in memory of Charles Sawdy.
Plant a tree in memory of Charles
Print
Online Memory & Photo Sharing Event
Online Event
About this Event