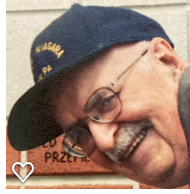 Please share a memory of Grover to include in a keepsake book for family and friends.
View Tribute Book
Grover Sexauer Grover Sexauer, of Millcreek Twp., passed away peacefully in his home on January 15, 2022 at the age of 95, surrounded by his loving family. Besides his parents, he was preceded in death by his beloved wife Florine, who passed in 2015. He is survived by his daughters: Peggy Robson of Angola NY, Patty Stoffan (Tom) of Erie, Lynnette Hamilton (Lynn) of Edinboro, Amy Fisher of Erie, and sons: Scott Sexauer (Autumn) of Millcreek and Jody Sexauer of McKean. He also is survived by 12 grandchildren, 12 great-grandchildren, and two great-great-grandchildren. Grover served in the US Army during World War II. After his military service, he held many different jobs around the country, but returned to Erie in 1962, and retired from GE after 32 years of service in 1986. He was a member of the Perry-Keystone Masonic Lodge. He enjoyed summer vacations with family and later in life enjoyed gardening. He was an avid life-long reader. Private services were conducted at the convenience of the family by the Dusckas-Martin Funeral Home and Crematory, Inc., 4216 Sterrettania Rd. Interment will be at Laurel Hill Cemetery. Carpe diem!
To plant a beautiful memorial tree in memory of Grover Sexauer, please visit our Tree Store

A Memorial Tree was planted for Grover
We are deeply sorry for your loss ~ the staff at Dusckas - Martin Funeral Home
Join in honoring their life - plant a memorial tree
Services for Grover Sexauer
There are no events scheduled. You can still show your support by planting a tree in memory of Grover Sexauer.
Plant a tree in memory of Grover
Print
Online Memory & Photo Sharing Event
Online Event
About this Event