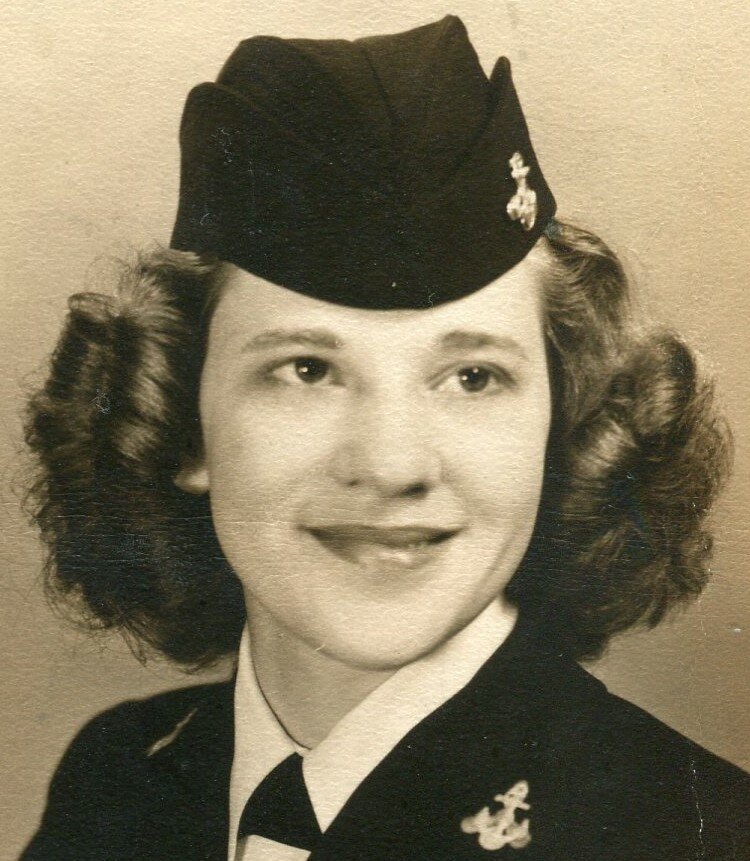 Please share a memory of Florine to include in a keepsake book for family and friends.
View Tribute Book
Florine Crawford, 97, went home to be with her Savior and Lord, she served throughout her life. She passed away Saturday January 22nd at the home of her brother Roger Giles. Florine was born on August 28, 1924 to William Thurbor Giles and Anna Lou (Cook) Giles in Chattaroy, West Virginia. Flow was the Salutatorian of her class and attended Bluefield Business School. She held several jobs and enrolled to serve in the W.A.V.E.S and was called into service November 1944. She was sent to Hunter College in NYC, then sent to Washington, DC for further training where she intercepted and decoded Japanese codes as a Classified job during WW II. She met and married the love of her life in Washington D.C. Upon discharge they moved to Erie working at General Electric. They later moved with their daughter to Philippi, West Virginia where he completed study to become a pastor; and she worked at the college. They served in various churches in the New England and Michigan areas before his retirement at Orange Harbor, FL. Upon the death of her husband, she moved to Sunset Beach, NC, next to her daughter Gayle. She was active in Calabash Covenant Presbyterian Church and First Alliance Church. Flo’s motto in life was: “Time for Kindness and Forgiving, Time for Friendship and Happy Living” -JFK She fulfilled every part of this motto. She loved vegetable and flower gardens, and was an avid fisherwoman and one of her favorite things doing with the grandchildren was having corn on the cob eating contests (which she won hands down). Her quick wit and giggle will never be forgotten. Besides her parents, she was preceded in death by her husband Rev. James Crawford, daughter Gayle Ann Crawford (Edwards), son-in-law Captain Jack Edwards, USMC who was killed in action in Desert Storm; brothers, Jack, William and Randall Giles. Sisters, Mary Gibbs (Thomas) and Gloria (Raymond) Carter. Survivors include her sister, Tabby (Anthony) Bonito; brother, Roger (Joan) Giles; two sisters-in-law, Rosa and Carol Giles, three grandchildren, Spencer (Katherine) Edwards, Bennett (Brianne) Edwards and Adriane (Patrick) Hodges and eleven grandchildren. Interment will be held at Virginia Beach, VA. A memorial celebration of her life will be held for her family and friends on August 28, 2022, on what would have been her 98th birthday. In lieu of flowers the family requests donation be made to the National Desert Storm War Memorial to honor Jack and her grandchildren. Donation can be sent to NDSWM, 1101 Connecticut Ave N.W., #450 Washington, D.C. 20036 or you can go on their website and donate www.ndswm.org. After donation, please email bill.carragan@ndswm.org for their records and acknowledgment.
To plant a beautiful memorial tree in memory of Florine Crawford, please visit our Tree Store

A Memorial Tree was planted for Florine
We are deeply sorry for your loss ~ the staff at Dusckas - Martin Funeral Home
Join in honoring their life - plant a memorial tree
Services for Florine Crawford
There are no events scheduled. You can still show your support by planting a tree in memory of Florine Crawford.
Plant a tree in memory of Florine
Print
Online Memory & Photo Sharing Event
Online Event
About this Event