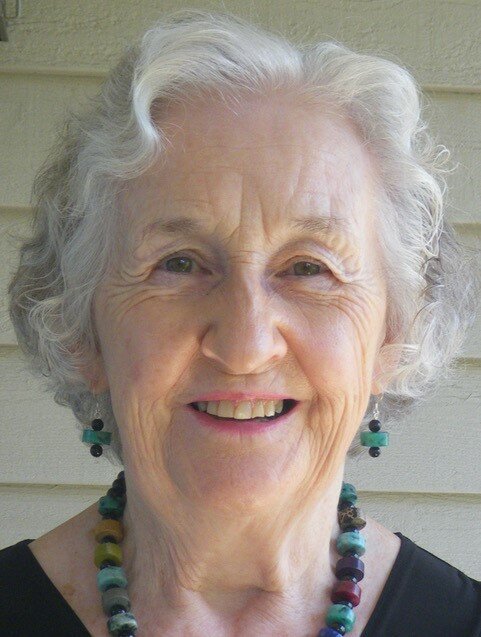 Please share a memory of Elaine to include in a keepsake book for family and friends.
View Tribute Book
Elaine Carolyn Parcells Fryer passed peacefully on February 14, 2022. She was born in Parkside, Pennsylvania, January 1933, to Willard K. Parcells and Helen Flinn Parcells. Elaine received a diploma from Parkside Public School and graduated from Swarthmore High School, in 1950, where she was active in the Red Cross Club and Intramurals including field hockey. She was musical, studying the piano and singing in the church choir. Elaine matriculated at Bucknell University where she majored in Social Sciences and German. She joined Alpha Phi Sorority, and was inducted into Delta Phi Alpha, the German Honorary Society, and Phi Alpha Theta, the History Honorary. She was active in the Glee Club and in Cap & Dagger, the dramatics club. Elaine received her Bachelor of Arts in 1954. Elaine met her soulmate, Donald M. Fryer, at the community swimming pool following high school graduation. They made many trips between Bucknell and Syracuse Universities, enjoying music, dancing, and many other events. They particularly loved jazz bands of the time, became proficient swing dancers, and enjoyed jazz and dancing throughout their lives. They married in September following graduation and moved to Wilmington, Delaware. Elaine served as President of the Alpha Phi Alumnae Chapter and Treasurer of the Wilmington Pan Hellenic Association, and was active in elementary schools as a substitute teacher and as a volunteer in her children’s schools. During this time, Elaine and Don started skiing, which would become the family sport and engage them until their 80s! The family moved to Fairview, PA in 1969, and the skiing focus deepened with volunteering with the Peek’n Peak Junior Racing Team, and then over 40 years volunteering with the Peek’n Peak Ski Patrol, serving for many years as a first-aid trainer, and eventually being outed as the Mogul Mouse who wrote up the Patrol news for the western New York Ski Patrol newsletter. Elaine developed other passions, including service as Membership Chair, Treasurer, and President of the League of Women Voters of Erie County, compiling the Voters’ Guide for many years, and genealogical research. She and Don were regular attendees at Erie cultural events, avid hockey fans and enthusiastic travelers to western North America ski mountains, and cultural excursions in Europe and China as well as through much of the United States. Elaine was preceded in death by her loving parents. She and Don would have celebrated 67 years of marriage in September, but sadly, Don passed in June. Elaine is survived, and was lovingly cared for, by son Marshall (Theresa) Fryer of Erie, daughter Karen (Cameron Begg) Fryer of Colorado, granddaughter Marisa Fryer of Massachusetts and grandson Gavin Fryer Begg of Wyoming. Dusckas-Martin Funeral Home & Crematory Inc. 4216 Sterrettania Rd. Erie, PA 16506, is handling arrangements. The family extends grateful thanks to the staff of Westlake Woods Assisted Living and Family Hospice of Erie, for their exceptional care. The family requests that contributions in Elaine’s memory be made to the Peek’n Peak Ski Patrol, 1405 Olde Rd. Clymer, NY 14724.
To plant a beautiful memorial tree in memory of Elaine Fryer, please visit our Tree Store

A Memorial Tree was planted for Elaine
We are deeply sorry for your loss ~ the staff at Dusckas - Martin Funeral Home
Join in honoring their life - plant a memorial tree
Services for Elaine Fryer
There are no events scheduled. You can still show your support by planting a tree in memory of Elaine Fryer.
Plant a tree in memory of Elaine
Print
Online Memory & Photo Sharing Event
Online Event
About this Event