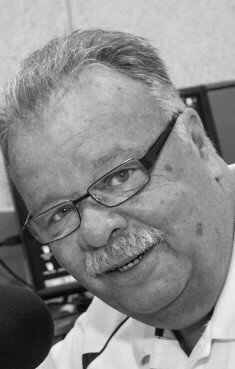 Please share a memory of Daniel to include in a keepsake book for family and friends.
View Tribute Book
Dan “Captain Dan” Geary Daniel “Captain Dan” F. Geary, age 72, of Fairview Township, passed away unexpectedly on Thursday, March 3, 2022 at his residence. He was born ON July 8, 1949 in Erie, PA. The son of the late Daniel J. and Katherine (Blystone) Geary. Erie’s Captain Dan had been waking up the people of Erie in a radio career that spanned over 50 years. His passion and love were his family, hometown of Erie, and radio show listeners. He had always been a proud and distinguished member of the Erie community; he couldn’t have been more enthused to represent Erie Pennsylvania as “Captain Dan” of the morning show. The only possible source of greater happiness was his family. Dan wed “The Lovely Mary Kay”, Kennerknecht at St. Peter’s Cathedral where Dan also served as page boy to the bishop and attended grade school. They shared 47 years of marriage together and celebrated their four children: Sean (Nicole), Bryan, Danny (Katy), and Lauren Argeny (Michael). Mary Kay and Dan loved traveling and escorted cruises to the Caribbean, as well as trips abroad. Dan was Erie born and raised, a graduate of Cathedral Prep, an ambassador and a dedicated emcee to the Catholic Charities, Children’s Miracle Network, Erie Zoo, and The Center for Achievement. Gregarious, kind, witty, and sincere are only surface-level adjectives that begin to describe what a dynamic gentleman he was. Dan’s passion was, without waiver, his professional career and audience, the listeners of whom he always declared “the greatest audience in the world”; earning him top ratings and numerous Erie Choice Awards. For 37 years, and the last seven, Dan dodged retirement in order to wake up Erie County every day; a genuine fulfillment and innate drive to bring people a happy welcoming to their day. Never was there a missed “Happy Birthday Shout-out” for the innumerable friends and listeners. No one could be more fortunate than his children, in-laws, and grandchildren who are completely grateful for his unconditional love and example. A true family man. Dan is survived by his wife Mary Kay, his children: Sean (Nicole) Geary, Bryan Geary, Lauren Argeny (Mike) all of Erie, and Danny (Katy) Geary of Winfield, IL. A brother Patrick (Sue) Geary of Erie, five grandchildren who would light up his world; Daniel, Molly, Kieran, Evalene and Lydia. Also survived by his in-laws Rob (Shelia) Kennerknecht, Norb (Jan) Kennerknecht, Beth (Bob) Dzurko all of Edinboro, and Marlene Kennerknecht of Fairview Township. Also, several nieces and nephews. He was preceded in death by his parents; Daniel J. and Katherine Geary and his infant siblings, Fred and Linda. Friends may call at the Dusckas-Martin Funeral Home and Crematory, Inc., 4216 Sterrettania Rd. on Monday, March 7, 2022 from 1 pm until 3 pm and 5 pm until 8 pm. Additional visitation will occur at St. Julia R.C. Church, 638 Roslyn Ave. Erie, PA 16505 on Tuesday, March 8, 2022 from 9 am until the time of the Funeral Mass at 10 am. Private interment. In lieu of flowers, memorial contributions may be made to the Autism Society of NW PA, 3308 State Street, Erie, PA 16508, St. Julia Church, or to the Inner-City Neighborhood Art House, 201 East 10th Street, Erie, PA 16503
To send flowers to the family or plant a tree in memory of Daniel Geary, please visit Tribute Store
Print
Monday
7
March