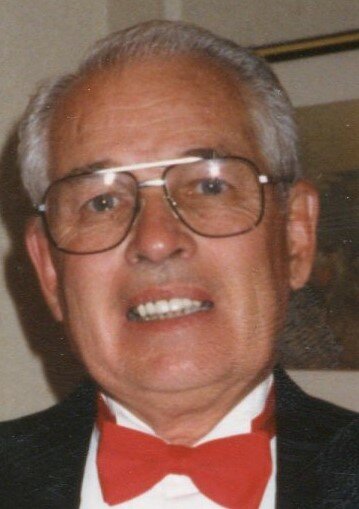 Please share a memory of Tom to include in a keepsake book for family and friends.
View Tribute Book
George Thomas “Tom” Bolan, 94, a resident of Sarah Reed Senior Living, passed away there on Friday October 14, 2022. He was born in Erie on February 15, 1928, a son of the late George E. and Ida (Lohse) Bolan. In addition to his parents, he was preceded in death by his first Wife Marion (Smith) Bolan; two sisters, Mary Klenz and Gerry Cochran; one brother, Robert Bolan, one granddaughter, Mary Ehret and four nieces and nephews. Tom graduated from Strong Vincent High School. At 16 he enlisted in the Merchant Marines in WW II, seeing action in the North Atlantic early in 1945. In April of 1945 after turning 17, he sailed around the world, on a tanker, supplying the troops with oil. He was awarded the following; Mediterranean – Middle East War Zone Bar, along with the War Zone Bars from the Atlantic and Pacific and the Victory Medal. He proudly served his country in the US Navy from 1949-53, seeing action in two tours of Korea aboard the heavy cruiser, U.S.S. St. Paul CA-73, which fired more shots than any other warship in history. Tom served as Past President of the U.S.S. St. Paul Association, all former shipmates who served on the ship during her 26 years of commission. This ship fired the last naval shots of WW II and Korea. She last served in Vietnam, returning in 1971. For service in Korea, Tom was awarded the Korean Service Medal, United Nations Service Medal, Navy Occupation Medal and China Service Medal. With his father as Past President and co-founder of the Times Old Newsies. Tom also served as Past President, he joined them in 1962 and never missed a sale. Tom retired from the United States Post Office in 1985 after 31 years of service. He also worked later at Lampe Marina and North Coast Travel. He enjoyed walking at Presque Isle State Park. He also liked to read and do crossword puzzles. He was a longtime avid Cleveland Browns, Cleveland Indians and Penn State fan. He volunteered his time at St. Vincent and was on the executive board of the auxiliary Tom is survived by his wife of 30 years Jean (Piper) Bolan; two daughters, Melissa Ehret and her husband Ted and Nadine Hummel and her husband Mark; three grandchildren, Madeleine Ehret, Max Hummel and Jack Hummel, one sister, Patty Niemic and twelve nieces and nephews. Friends may call at the Dusckas-Martin Funeral Home & Crematory Inc. 4216 Sterrettania Rd. on Friday morning, October 21, 2022 from 10:30 AM until the time of the Memorial Service at 11:00 AM. Interment with full military honors will follow in Laurel Hill Cemetery. Memorial contributions may be made to, Parkinson Partners of NW PA Inc. at P.O. Box 10547 Erie, PA 16514.
To send flowers to the family or plant a tree in memory of Tom Bolan, please visit Tribute Store
Print
Friday
21
October