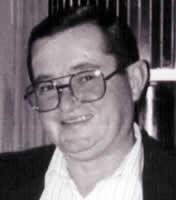 Please share a memory of Thomas to include in a keepsake book for family and friends.
View Tribute Book
Thomas Harrington Thomas Harrington, age 60, of Erie went to be with the Lord on Monday, February 11, 2008. He was born on August 11, 1947 in Pittsburgh, PA, the son of the late John T. and Ruth Miller Harrington. He spent much of his life in McKean, PA, until this last year when he took up residency at the Pennsylvania Soldiers' and Sailors' Home. He was a 1965 graduate of General McLean High School. He began his working life at Waldameer Park before he was hired at American Sterilizer Company. In April of 1966 he enlisted with the U.S. Air Force which took him to Lackland Air Force Base in Texas, to Columbus Air Force Base in Mississippi with the 454th Bomber Squadron - Strategic Air Command, to Anderson Air Force Base in Guam, and then to Kadena Air Force Base in Okinawa, Japan. He was honorably discharged in February of 1970. He then returned to work at American Sterilizer for 39 years until his retirement in 2004 due to health reasons. During his retirement he volunteered his time when he could to assist the Maria House Project and was active in his church, the United Methodist Church of McKean, PA. He is survived by his brothers, Dennis Harrington and his wife, Karen, of Key Largo, FL and John Harrington and his wife, Karen, from the local area; two sisters, Darlene Zimmer of Lenoir City, TN and Merrie Tinnel and her husband, Lanny, of Sweetwater, TN; and numerous nieces and nephews. Friends may call at the Dusckas-Martin Funeral Home and Crematory, Inc., 4216 Sterrettania Road, Erie, PA on Thursday from 2 to 5 and 7 to 9 p.m. and are invited there Friday until time of the funeral service at 11:00 a.m. conducted by Pastor Barbara English of the McKean United Methodist Church. Memorial contributions may be made to the Maria House Project, P.O. Box 10682, Erie, PA 16514.
To plant a beautiful memorial tree in memory of Thomas Harrington, please visit our Tree Store

A Memorial Tree was planted for Thomas
We are deeply sorry for your loss ~ the staff at Dusckas - Martin Funeral Home
Join in honoring their life - plant a memorial tree
Services for Thomas Harrington
There are no events scheduled. You can still show your support by planting a tree in memory of Thomas Harrington.
Plant a tree in memory of Thomas
Print
Online Memory & Photo Sharing Event
Online Event
About this Event