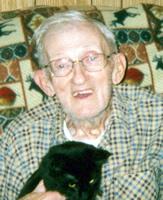 Harry L. Hawthorne Harry L. Hawthorne, age 87, of Millcreek Twp., died Monday, April 30, 2007 at his residence. He was born on February 12, 1920, in Titusville, PA, the son of the late, Victor and Cecil Howard Hawthorne. He was employed at Hayes Mfg, Lovell Mfg., and he retired from the Millcreek Twp. School District where he was employed at Grandview Elementary School. Harry enjoyed being in the sunshine, spending time with family and friends, and traveling. In his early years, he lived and worked in Hollywood, CA and played a role in the movie, &quot;White Cliffs of Dover&quot;. He is survived by his wife of 57 years, Audrey Brown Hawthorne, three daughters: Cindy Kendziora (John) of Homassasa, FL, Denise Hickin (Dennis) of Millcreek, Lorie Hawthorne (Bill Beach) of Erie, five sons: Allen Hawthorne (Beth), Harry Hawthorne, Jr., Dennis Hawthorne (Tracy), William Hawthorne (Jean), Edward Hawthorne, all of Erie, two brothers, George Hawthorne (Marion) of Titusville, Frank Moorehead (Betty) of NC, 13 grandchildren, and nieces and nephews. Harry was preceded in death by one grandson, Jeremy Hawthorne, and two brothers, Victor and William Hawthorne. Friends may call at the Hawthorne Family residence today, Wednesday, May 2, 2007 at 4607 Lancaster Rd., beginning with a service at 1:00 p.m. and continuing until 6:00 p.m. Private interment. Arrangements are being handled by the Dusckas-Martin Funeral Home, Inc., 4216 Sterrettania Rd. In lieu of flowers, memorial contributions may be made to the Alzheimer's Association of NWPA, 1128 State St., Suite 301, Erie, PA 16501.
To plant a tree in memory of Harry Hawthorne, please visit Tribute Store
Services for Harry Hawthorne
There are no events scheduled. You can still show your support by planting a tree in memory of Harry Hawthorne.
Visit the Tribute Store
Plant a Tree
Print
Share A Memory
Plant a Tree