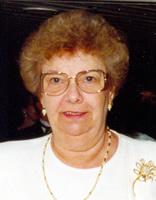 Ruth Herman Ruth F. Smith Herman, age 74, of Millcreek Township, died of cancer on Thursday, May 10, 2007. She died at her home surrounded by her family. She was born on August 29, 1932, in Franklin, PA the daughter of Charles M. and Violet Fennel Smith. She lived in Erie most of her life and was employed at Dahlkempers, GTE, Erie Insurance, and most recently the Peter George Agency. She was a member of St. George Church and a PTA lifetime member of Grandview School. She enjoyed family dinners, crafts, sewing, quilting, shopping QVC, and attending her grandchildren's band, theater, musical, football, and their other sporting events. She also enjoyed lunches with her friends, high school classmates, and her Erie Insurance secret pal birthday club. Ruth was a 1950 graduate of Academy HS and she retired from the Peter Ins. (Erie Ins. Group) and she had her licenses in auto, home, and life insurance with Erie Ins. After her retirement, she volunteered many years at Mill creek's Grandview Elementary and Walnut Creek Middle School and she was on both PTA Boards. Ruth was awarded the PTA PLM Award for her many volunteer hours. She is survived by one daughter, Richele &quot;Shelly&quot; Herman, and a special granddaughter, Danielle (Nelly), with whom she resided. Three sons also survive her: R. Scot Herman (Sue), and grandsons: Cory, Jeremy and Joshua, of Millcreek, son, Robin Herman (Kathlene), four step- grandchildren: Gabe, Natalie, Katrina, and Zachary, of Erie, a son, Rhett Herman (Debra), grandchildren: Derick, Brandon, and Nicole. Also surviving are three sisters: Doris Sutley, Mable Gianoni, and Dorothy George (Peter), and many loved nieces and nephews. One sister, Patricia Toflinski, preceded Ruth in death Friends may call at the Dusckas-Martin Funeral Home, Inc. 4216 Sterrettania Rd. on Monday from 2 to 5 and 7 to 9 p.m. and are invited there on Tuesday at 9:15 a.m. for prayers followed by a Mass of Christian Burial at St. George RC Church at 10:00 a.m. Interment Laurel Hill Cemetery. In lieu of flowers, memorial contributions may be made to the family in care of the funeral home for books for the following school libraries: Grandview, Walnut Creek, St. George, Blessed Sacrament and Rolling Ridge, or to Great Lakes Hospice, 1700 Peach St. Erie, PA 16509.
To plant a tree in memory of Ruth Herman, please visit Tribute Store
Services for Ruth Herman
There are no events scheduled. You can still show your support by planting a tree in memory of Ruth Herman.
Visit the Tribute Store
Plant a Tree
Print
Share A Memory
Plant a Tree