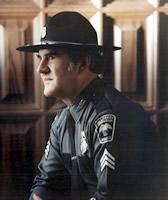 Richard William Herman Richard William Herman, age 76, of Naples, FL, formerly of Millcreek Twp., died Wednesday, September 26, 2007 in Naples after a brief illness. He was born in Erie on June 21, 1931, the son of Josephine Dahlkemper Herman of Erie and the late Archie Herman. Richard was a 1949 graduate of Cathedral Prep and a Veteran of the Korean Conflict. He retired as a sergeant after twenty-nine years of service with the Millcreek Twp. Police Department in 1987. He belonged to the FOP, American Legion Post #135- Hardee Mills in Naples where he held the office of Historian, the American Vets, Veterans of Foreign Wars, the Combat Infantrymen's Association, the Korean War Veterans Association, Inc., the Moose and Elk Clubs, and was a life-time member of the Zukor Club. He belonged to St. Ann's R.C. Church in Naples. He enjoyed his daily walks on the Naples Beach and Pier and was a fan of the Cleveland Indians and Browns. Four children survive Richard: R. Scot Herman and his wife, Susan of Millcreek Twp., Richele &quot;Shelly&quot; Herman of Millcreek Twp., Robin Herman and his wife, Kathleen of Erie, Rhett Herman and his wife, Debra of Harborcreek, one brother, Robert C. Herman and his wife, Liz of McKean, two sisters; Ann Marie Torrelli of Girard, and Janet Cole and her husband, Roger of Erie. Also surviving are his grandchildren: Corey, Jeremy, Joshua, Danielle, Derick, Brandon, and Nicole Herman and step-grandchildren: Gabriel, Natalie, Katrina, and Zachary Little, his dear friend, Nancy Santora of Naples and many nieces and nephews. Friends may call at the Dusckas-Martin Funeral Home, Inc. 4216 Sterrettania Rd. on Sunday from 2 until 6 p.m. Private interment. Memorial contributions may be made to the family in care of the funeral home for construction of a memorial bench in Richard's name at Naples's Pier.
To plant a beautiful memorial tree in memory of Richard Herman, please visit our Tree Store

A Memorial Tree was planted for Richard
We are deeply sorry for your loss ~ the staff at Dusckas - Martin Funeral Home
Join in honoring their life - plant a memorial tree
Services for Richard Herman
There are no events scheduled. You can still show your support by planting a tree in memory of Richard Herman.
Plant a tree in memory of Richard
Print
Share A Memory
Plant a Tree