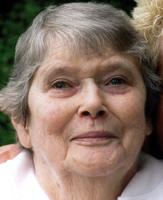 Joanne M. Eller Hickey Joanne M. Hickey returned to the Lord, and her departed family and friends on Tuesday, November 01, 2011 following a brief illness. The world will miss her sense of humor! Joanne was born in New York, NY, January 9, 1927, the daughter of Linus V. and Nona I. Eller, and spent her early years in the Queens, NY area. Subsequently, her family moved to Cayuga, NY where she attended Union Springs High School. Joanne returned to New York City to attend the John Powers School of Modeling and later worked at Lord &amp; Taylor's as a comparison shopper. In 1949 she married her high school sweetheart, the late (1993) John J. &quot;Rupert&quot; Hickey who was serving in the U.S. Navy. They were married forty-four years. Joanne raised their two sons (Brian J. Hickey/Tammy-Erie, PA and William L. Hickey/Beth-Big Sky, MT) in several east coast Navy towns, and settled in Schenectady, NY where she worked as a drafter for both the American Locomotive Co. and General Electric Co.. Joanne also helped with Rupert's dental laboratory business and opened her own ceramic studio. She was a member of the Bishop Gibbons H.S. Mothers' Club, The Legion of Mary, and The Rosary Society at St. Paul the Apostle Church in Schenectady. In the mid 1960's, Joanne and Rupert purchased a home in Schroon Lake, NY. She loved the village and the Adirondack Mountains, and introduced the family to skiing. During those years, Joanne entertained dozens of friends and several generations with a blend of unique comedy (aka Mary McCabe), storytelling, and cooking. In 1966, she started an annual family get-together on July 4th, which survives to this day. Joanne maintained her home in Schroon Lake right up until 2008, when she took up residence at Pleasant Ridge Manor in Girard. She was introduced to a wonderful, thoughtful, and caring staff who befriended her each and every day. Our family is especially indebted to Jan Boderocco, who took a special interest in Joanne's needs. Joanne was preceded in death by her brother Cornelius L. Eller. In addition to her sons and their wives, she is survived by two granddaughters, Kaleena and Karlee Kowalewski-Erie, PA, brother-in-law David Hickey/Paula-Clyde, NY), sister-in-law Genevieve McQueeney/Joseph-Auburn, NY, and several wonderful nieces and nephews. In addition, Joanne leaves behind her beloved basset hound, &quot;Henry&quot; who lives in Schroon Lake. Local arrangements were handled by the Dusckas-Martin Funeral Home and Crematory, Inc., 4216 Sterrettania Rd. There will be no viewing hours. A funeral Mass will be held Saturday, November 12th, at 11:00 a.m. at Sacred Heart Church, 90 Melrose Ave., Auburn, NY. Following those services, burial will be take place at Lakeview Cemetery, Cayuga, NY. In lieu of flowers, the family is requesting donations be sent to your local humane society. Enhance your memorial with a slideshow and video
To plant a beautiful memorial tree in memory of Joanne Hickey, please visit our Tree Store

A Memorial Tree was planted for Joanne
We are deeply sorry for your loss ~ the staff at Dusckas - Martin Funeral Home
Join in honoring their life - plant a memorial tree
Services for Joanne Hickey
There are no events scheduled. You can still show your support by planting a tree in memory of Joanne Hickey.
Plant a tree in memory of Joanne
Print
Share A Memory
Plant a Tree