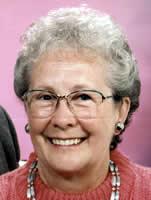 Dorothy Mae Bradish Hill Dorothy Mae Bradish Hill, age 82, of Millcreek Twp. died Friday, September 28, 2007 at Hamot Medical Center after a brief illness. She was born in Erie, PA on January 25, 1925, the daughter of the late Merton and Hazel Tunison Bradish. Dorothy was a graduate of Academy High School, a member of Eastern Star, Betsy Ross Chapter (member of its Drill Team), volunteered with Meals on Wheels, she was a Sunday School teacher at Mt. Calvary Lutheran Church, she loved baking apples pies, reading, knitting, cross stitch, and following the accomplishments of her children and grandchildren. She is survived by her husband of 63 years, Homer &quot;Shorty&quot; N. Hill whom she met at the age 13, two daughters, Sandy L. Hayes and her significant partner, Douglas Bible of Lake City, Sally Toker and her husband, Ronald of Fairview, one son, Ricky Alan Hill and his wife, Debra K. (Sullivan) Hill of LA, CA, one twin sister, Dorras Blewett of Columbus, OH, five grandchildren: Ronald and Chris Hayes, Ronald, Tammy, and Jeff Tokar, and six great-grandchildren: Khylinn, Griffin, and Christopher Hayes, Jaymie Tokar, Zachary Lafaro, and Nathan Tokar. She is further survived by her special club-girls, nieces, nephews, and in-laws. Dorothy was preceded in death by two brothers, Dan and Arlie Bradish and one sister, Ila Baldwin. Friends may call at the Dusckas Martin Funeral Home, Inc., 4216 Sterrettania Rd. on Sunday from 7 to 9 p.m. and Monday 2 to 5 &amp; 7 to 9 p.m. and are invited there on Tuesday at 10:00 a.m. for the funeral service. Entombment Erie County Memorial Gardens. Memorial contributions may be made to The Humane Society, 2707 Interchange Rd., Erie, PA 16506.
To plant a beautiful memorial tree in memory of Dorothy Hill, please visit our Tree Store

A Memorial Tree was planted for Dorothy
We are deeply sorry for your loss ~ the staff at Dusckas - Martin Funeral Home
Join in honoring their life - plant a memorial tree
Services for Dorothy Hill
There are no events scheduled. You can still show your support by planting a tree in memory of Dorothy Hill.
Plant a tree in memory of Dorothy
Print
Share A Memory
Plant a Tree