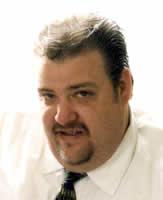 Bryan A. Russell Bryan A. Russell, age 40, of Erie, died accidentally as a result of an automobile accident on February 16, 2008. He was born on February 1, 1968 in Erie, the son of Joyce E. Pedersen Russell and the late Donald F. Russell, who died in 2007. He was a 1986 graduate of Academy High School and was previously employed at Fat Boys and currently at Luigi's. He was an avid 49'ers fan and enjoyed his family, especially his nieces, nephews, and special friends. Besides his mother, he is survived by one sister, Tami A. Russell-Brown and her husband, Edward, of Erie, one brother, Donny Russell and his wife, Becky, of Erie, one sister-in-law, Mary-Helen Russell, nieces: Danielle, Abigail, Angela, and Rachel, and nephews: Michael, Justin, Thomas, and Ricky. One brother, Michael S. Russell, preceded him in death in 2001. Friends may call the Dusckas-Martin Funeral Home and Crematory, Inc., 4216 Sterrettania Rd. on Wednesday from 2 to 5 and 7 to 9 p.m. and are invited there on Thursday at 11 a.m. for the funeral service. Interment Laurel Hill Cemetery.
To plant a beautiful memorial tree in memory of Bryan Russell, please visit our Tree Store

A Memorial Tree was planted for Bryan
We are deeply sorry for your loss ~ the staff at Dusckas - Martin Funeral Home
Join in honoring their life - plant a memorial tree
Services for Bryan Russell
There are no events scheduled. You can still show your support by planting a tree in memory of Bryan Russell.
Plant a tree in memory of Bryan
Print
Share A Memory
Plant a Tree