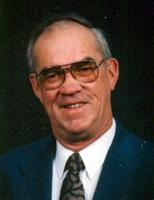 Richard N. &quot;Dick&quot; Smith Richard N. &quot;Dick&quot; Smith, age 77, of Erie passed away on Tuesday, May 1, 2007 at St. Vincent Health Center after an extended illness. He was born on February 20, 1930 in Cochranton, PA, the son of the late, Harry E. and Harriett E. Williams Smith. Richard served in the US Army during the Korean conflict as a Sergeant 1st. Class. He and his late son, Richard N. Smith, Jr., owned and operated R &amp; S Sales on West 23rd. St. for over twenty years. He was a partner in Kenru Rebuilders and he also worked at Erie GE in the locomotive division prior to venturing into his own independent enterprises. He belonged to Church of the Cross and was a member of Zem Zem Shriners. Richard enjoyed home improvements, gardening, and his grandchildren. He is survived by his wife of 54 years, Jean Warren Smith, two sons, Timothy D. Smith (Amy) of Bowling Green, OH, Gerald P. Smith (Michelle) of Millcreek, one daughter, Tracy R. Ryback Gordon (Tim) of Millcreek, one brother, William E. Smith of Jacksonville, FL, 12 grandchildren and several nieces and nephews. One son, Richard N. Smith, Jr, one sister, Mary Pauline Smith and one brother, Earl Smith, preceded him in death. Friends may call at the Dusckas-Martin Funeral Home, Inc. 4216 Sterrettania Rd. on Thursday from 2 to 4 p.m. and 7 to 9 p.m. and are invited there on Friday for the funeral service at 11:00 a.m. conducted by the Rev. James Moelk. Private interment. Memorial contributions may be made to the Erie Regional Cancer Center, 2500 West 12th St. Erie, PA 16505 or to Church of the Cross, 5901 Millfair Rd. Fairview, PA 16415.
To plant a tree in memory of Richard Smith, please visit Tribute Store
Services for Richard Smith
There are no events scheduled. You can still show your support by planting a tree in memory of Richard Smith.
Visit the Tribute Store
Plant a Tree
Print
Share A Memory
Plant a Tree