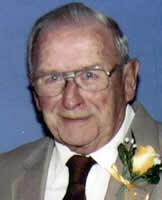 George R. Tarkowski George R. (Pooch) Tarkowski, age 87, of Millcreek Twp. left to be with his son on Monday, January 25, 2010 at Golden Living Center at Walnut Creek. He was born in Erie, PA on January 1, 1923 to the late Joseph and Frances Kozik Tarkowski. A life-time resident of Erie, he graduated from Erie Technical High School, and then served in France in the US Army during WWII. George then became a mechanic at Dailey's Chevrolet and later owned George's Texaco at 38th and Washington. He proudly retired as chief mechanic with the city of Erie Fire Department. He was a life member of the Knights of St. John and the VFW, and was in the Senior Gold League at Elk Valley; golfing as late as this past November. He was preceded in death by one son, David Tarkowski, three brothers: Anthony, Edward and Robert Tarkowski. He is survived by his wife of 67 years, Lucy (Loiacono) Tarkowski, one daughter, Georgia Tarkowski of Erie, one sister, Dorothy (Frank) Slurkanich of Millcreek, one daughter-in-law, Lee Mix, and grandchildren: Jennilee Mix, Thomas, and Andrew Blackburn of Fairview, sister-in-law, Gertrude Tarkowski of Erie, and several nieces, nephews, and godchildren. Friends may call at the Dusckas-Martin Funeral Home and Crematory, Inc., 4216 Sterrettania Rd. on Thursday from 3 to 7 p.m. and are invited there on Friday for the funeral service at 11:00 a.m. Private interment Laurel Hill Cemetery. Memorial contributions may be made to the family in care of the funeral home. Enhance your memorial with a slideshow and video
To plant a tree in memory of George Tarkowski, please visit Tribute Store
Services for George Tarkowski
There are no events scheduled. You can still show your support by planting a tree in memory of George Tarkowski.
Visit the Tribute Store
Print
Share A Memory
Plant a Tree