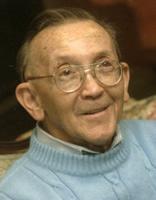 Joseph Anthony Verno Joseph Anthony Verno, age 92, formerly of Erie and Springhill Senior Living, went to be with his God and departed loved ones on Wednesday, May 2, 2012 at Rolling Fields Nursing Home in Conneautville, Pa. He was born at home, on West 2nd Street (downstairs) in Erie on October 27, 1919, the son of the late Algerino (Verna) and Assunta (Trolli) Verno. He was preceded in death by his wife, Shirley (Stranigan) Verno in 2003, (downstairs): his parents, two sisters; Alice Buckner and Aida Roos, two brothers; Alfred and Alexander Verno, (upstairs): two cousins, his uncle, and aunt, plus other cousins, uncles, and aunts. Joe also lost his beloved grandson (25 years old), Timothy Grosso, in 1995. He is survived by his brother, Paul Verno (Marcia), four cousins; Abby, Marion, Carol and Delores, his daughter, Patricia Grosso ( Charles), of Erie and sons; William Verno (Shari), of Lawrence Park, Stephen Verno of Keller, TX, and Jay Verno (Bernadette) of Meadville, PA, grandchildren: Michael, Matthew, Daniel, and Patrick Grosso, Melanie Kobierecki (Michael), of Pittsburgh, Lauren, Rachel, Nick, and Nicole Verno, Kelly Rogala, Katie Rogala Frick, and Courtney Rogala, great-grandchildren: Leann Grosso, Savanna Stuntz-Grosso, Cheyanne Rozenek, Kiera Bacik, T.J. and Zachary Rodriguez, great-great-grandchildren; Amyah Grosso and Dennis Nelson, Jr. He started St. Andrew School the first year when classes were held in the church with the seats as desks and the kneelers as seats. Joe then went on to Strong Vincent High School, but left after 10th grade to work with his father as a cement contractor and later with his brother, Paul as a plastering contractor (Jay Verno &amp; Sons and later Verno Brothers Plastering). He also worked at Lord's Mfg. Co. during the war. He finished off a new home with his wife on West 32nd Street in 1950 and lived there until 2003 when they moved to St. Joseph Apts. where his wife died suddenly within a few weeks. He loved to sing and was in the mixed choir at Blessed Sacrament Church. He also learned to play dominos with his daughter and son-in-law while in a nursing home. He also enjoyed billiards, poker, and horseshoes. Later he needed to be moved to Elm Street in Rolling Fields at Conneautville, PA. Friends may call at the Dusckas-Martin Funeral Home and Crematory, Inc., 4216 Sterrettania Rd. on Monday from 2 to 4:30 p.m. and 7 to 9 p.m. and are invited to Blessed Sacrament R.C. Church on Tuesday for a Mass of Christian Burial at 10:00 a.m. conducted by Msgr. Daniel Magraw. Interment Laurel Hill Cemetery. Memorial contributions may be made to the Msgr. Conley Memorial Scholarship Fund at Blessed Sacrament School, 2510 Greengarden Blvd., Erie, PA 16507. Enhance your memorial with a slideshow and video
To plant a tree in memory of Joseph Verno, please visit Tribute Store
Services for Joseph Verno
There are no events scheduled. You can still show your support by planting a tree in memory of Joseph Verno.
Visit the Tribute Store
Print
Share A Memory
Plant a Tree