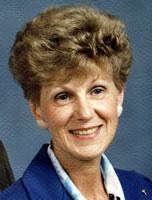 Please share a memory of Virginia to include in a keepsake book for family and friends.
View Tribute Book
Virginia Jefferson Wertz Virginia &quot;Ginny&quot; Jefferson Wertz, age 72, of Millcreek Twp. died Thursday, August 28, 2008, at her residence, surrounded by her loving family. Ginny was born in Erie on May 14, 1936, the daughter of the late Victor G. and Evelyn C. Jefferson. Ginny was a lifetime Erie resident. She graduated from Academy H.S. in 1954. She held several different jobs in her lifetime, having been employed at National Fuel, Sears, Erie Insurance Credit Union, and St. Paul's Preschool. She was a member of First Alliance Church, Erie Striders, and Bunny Hoppers (with her high school friends). She enjoyed biking, hiking, camping, reading, bird watching, traveling, spending time with her grandchildren, and spending time at her country property where she attended to her apple orchard. She is survived by her husband of 47 years, Michael H. Wertz; two sons: Michael D. Wertz and his wife, Lisa, of Waterford and Daniel P. Wertz and his wife, Janine, of Ashtabula; one sister, Arlene Elsa Evans, and her husband, John, of Erie; and four grandchildren: Bryan, Shelby, Gretta, and Garrett. She was preceded in death by a sister, Joanna Jefferson. Friends may call at the Dusckas-Martin Funeral Home and Crematory, Inc., 4216 Sterrettania Road, Erie, PA 16506, on Saturday from 2 to 4 and 7 to 9 p.m. and are invited there on Sunday for the funeral service at 3:00 p.m., conducted by Reverend David Snyder. Private interment. In lieu of flowers memorial contributions may be made to First Alliance Church, 2939 Zimmerly Road, Erie, PA 16506, or to Presque Isle Partnership, P.O. Box 8510, Erie, PA 16505.
To plant a beautiful memorial tree in memory of Virginia Wertz, please visit our Tree Store

A Memorial Tree was planted for Virginia
We are deeply sorry for your loss ~ the staff at Dusckas - Martin Funeral Home
Join in honoring their life - plant a memorial tree
Services for Virginia Wertz
There are no events scheduled. You can still show your support by planting a tree in memory of Virginia Wertz.
Plant a tree in memory of Virginia
Print
Online Memory & Photo Sharing Event
Online Event
About this Event