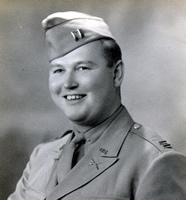 Charles M. Wright Charles M. Wright, age 91, of West Lake Woods Assisted Living, Millcreek Twp., died Sunday, May 27, 2007 at his residence. He was born in Olean NY, on April 10, 1916, the son of the late, Charles W. and Mildred Carr Wright. He had resided in Erie most of his life. He was a 1934 graduate of Academy H. S. He joined the National Guard at the age of 16 in 1933 and in Feb. of '41 the guards were inducted in the 112th. Infantry. He served and retired as Captain in 1946, but was awarded the rank of Major in Nov. 1946. Charles retired form the National Forge in 1978. He was a member of the American Legion, and enjoyed reading, black powder guns, and his gardening. His wife, Helen L. Carey Wright in 1981 and one brother, Wilbur R. Wright, preceded him in death. One sister, Miriam W. Kimball of Millcreek Twp., two nieces, Lisa Owen (Ellis) and Barbara English (David) survive him. Private services will be held at the convenience of the family. Arrangements are being handled by the Dusckas-Martin Funeral Home, Inc. 4216 Sterrettania Rd. In lieu of flowers, memorial contributions may be made to the Erie Humane Society, 2707 Interchange Rd. Erie, PA 16506.
To plant a tree in memory of Charles Wright, please visit Tribute Store
Services for Charles Wright
There are no events scheduled. You can still show your support by planting a tree in memory of Charles Wright.
Visit the Tribute Store
Plant a Tree
Print
Share A Memory
Plant a Tree