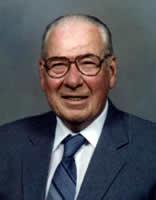 J. Russell Wright J. Russell Wright, age 82, of Millcreek Twp. died Sunday, June 10, 2007 at his residence surrounded by his loving family. He was born on February 25, 1925 in Akron, OH, the son of the late, Russell H. and Clementine Jepson Wright. He resided in the Erie area for most of his life. He served in the US Air Force during WWII and was awarded many medals and ribbons. Penn Brass and Copper and Ervite employed him. Russ was also a member of the American Legion Millcreek Post 773 and Wayside Presbyterian Church. He enjoyed playing the keyboard, accordion, hunting, fishing, and his family. He is survived by his wife of sixty years, Evelyn D. Schermer Wright, three daughters: Janet M. Kyle and her husband, James of Millcreek, Jeanne L. Head and her husband, James of Millcreek, Joyce Wright and her life-time partner, Dave Wheaton of Erie, one son, James R. Wright and his wife, Julie A. of Millcreek, one sister, Diane E. Whalen (Bernie Boehm). Also surviving are one sister-in-law, Barbara Wright, nine grandchildren, three great-grandchildren, and many nieces and nephews. One brother, Robert H. Wright, and one sister, Dorothy C. Wagner, preceded him in death. Friends may call at the Dusckas-Martin Funeral Home, Inc., 4216 Sterrettania Rd. on Wednesday from 2 to 4 and 7 to 9 p.m. and are invited there on Thursday at 12:00 Noon for the funeral service. Interment Erie County Memorial Gardens. Memorial contributions may be made to the VNA Hospice of Erie County, 1305 Peach St., Erie, PA 16501, the Alzheimer's Association, 1128 State St., Suite 301, Erie, PA 16501, or to the Regional Cancer Ctr., 2500 West 12th St., Erie, PA 16505.
To plant a tree in memory of J. Wright, please visit Tribute Store
Services for J. Wright
There are no events scheduled. You can still show your support by planting a tree in memory of J. Wright.
Visit the Tribute Store
Plant a Tree
Print
Share A Memory
Plant a Tree